Generating functional annotation of variants generated from analyzing whole genomes is an essential part of WGS data analysis. Large quantities of genome data are now available, but genome-wide association studies that depend on rare variants lack statistical power. Combining annotations from many sources provides a comprehensive “genome map” boosting statistical power of association studies. Additionally, annotations are useful to filter variants to suit the analysess of interest. For example, an analyst may be interested in variants that only enhance a particular function.

The TOPMed project uses a tool called WGSA (Whole Genome Sequence Annotator) tool for the annotation of variants generated from the project. The WGSA tool is availble as an Amazon Machine Image and is runnable from the Amazon Compute Cloud. However, it requires analysts to setup a cloud account, gain the expertise to instantiate the pipeline and assemble the required annotation databases. The default pipeline out of the box generates annotations serially using a single compute node where the pipeline is setup. This process can take weeks to months for a large set of variants and hence has the potential to drive up the compute costs of annotation.

We created a high performance, cost-effective and parallel implementation of the WGSA annotation pipeline. 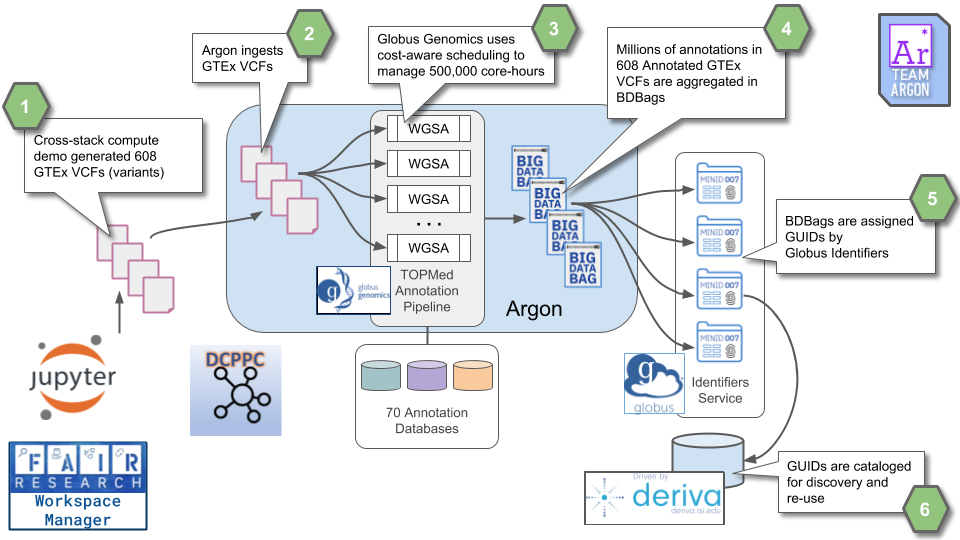 This example highlights Re-Use and interoperability of data and computational tools. The variant files come from the DCPPC Cross-Stack Compute Demo while the annotation tool is from the TOPMed project. The annotations are scaled across the input data using cost-aware cloud provisioning to create a rapid yet inexpensive pipeline. The results are packaged for sharing by using BDBags as a common data exchange format and referenced by GUIDs with agreed upon metadata conventions. Because the tools and services comprising this architecture build on interoperable components (e.g., OAuth2/OIDC used by Globus Auth) additional patterns emerge. This workflow can be driven from by a Jupyter notebook, beginning with calls to DERIVA or another portal for cohort creation, through the computation and its requisite data handling, and back to DERIVA to associate the results with the original cohort.

The annotated VCFs are being aggregated into BDBags and assigned Minids (a type of KC2 GUID, here’s an example). We’ve made an initial pull request into the DCPPC Full Stacks repository to share these identifiers with the other teams. We’ll update the new file created in that pull request (gtex-wgs-annotated-vcf-wgsa.tsv) as the annotation runs complete via additional pull requests. Also, the Minids will be ingested into our DCPPC instance of DERIVA to tie these new files back to the original sequences.

Check out this presentation for more details about the science and components.